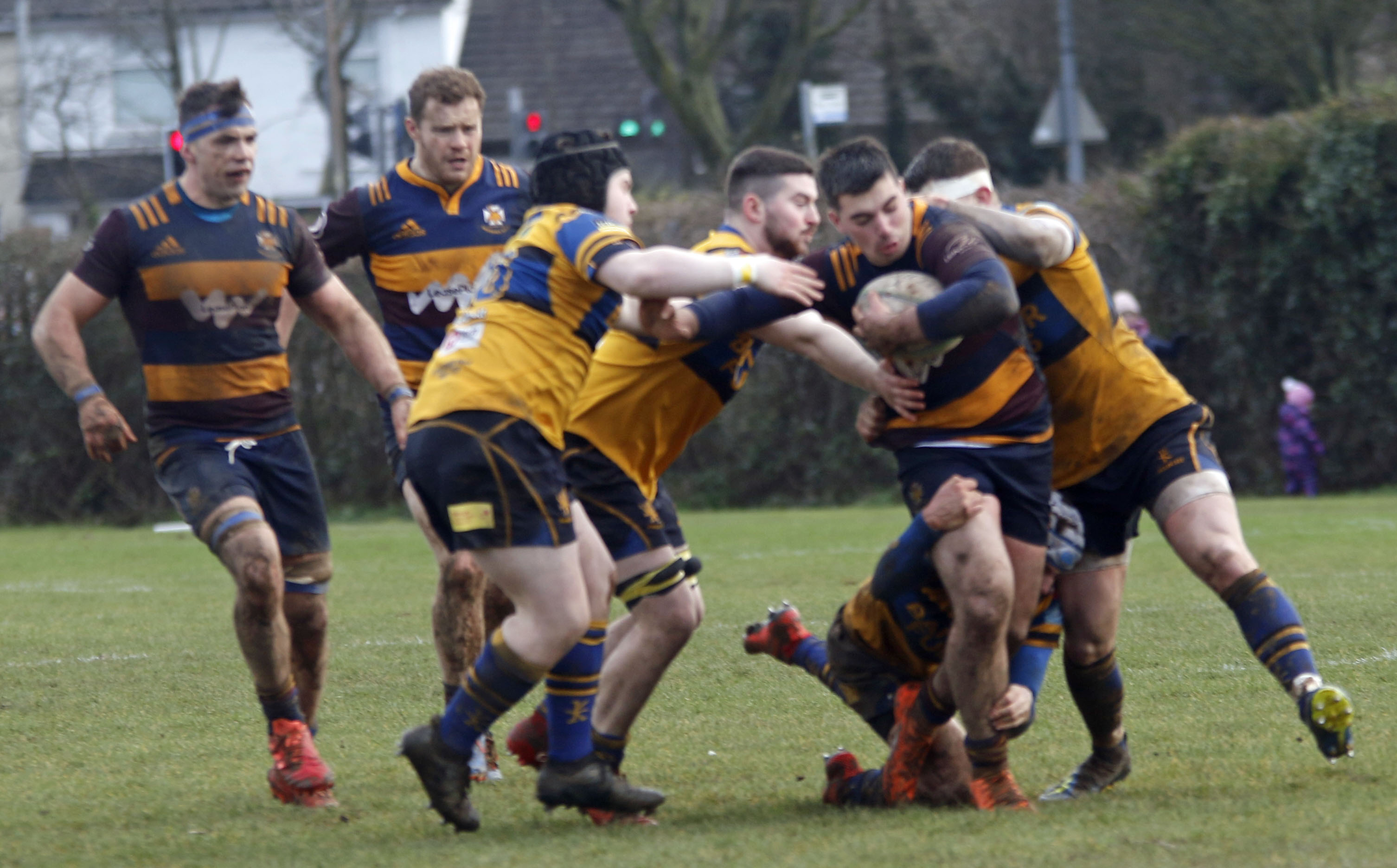 On what turned out to be a seismic day in Division 2C of the All Ireland League, Skerries traveled to Uprichard Park to face a home team buoyed after an away win in City Of Derry in the previous round. The match started in windy and wet conditions and then followed a hail shower to add to the difficulties for the players. Skerries played with a significant breeze in the first half and despite putting a lot of pressure on the home team found it difficult to convert opportunities into scores.

17 minutes in, after a lineout win by Tom Mulvaney, an excellent Skerries maul was finished off by Ross McAuley and converted by Paul O’Loghlen. Skerries continued to dominate but couldn’t add to score line, until right on half time and after excellent back play, Kevin McGrath scored in the corner to leave the half time score 12—0 to the visitors. The good news was that the wind was dropping and despite all the rain the pitch was still in good condition, but Skerries were going to have a real challenge in the second half. The returning duo of Ross Halligan and Johnny Sherwin were excellent in the first spell, backed by a strong lineout and a good maul.

Skerries started the second half on the front foot and Paul O’Loghlen kicked superbly to put the home team under constant pressure. After a fumble inside the Bangor 22, Mark Oliver followed up to score in the corner to give the visitors a 17-0 lead with 30 minutes to go. Another flowing move by the Skerries backline broke down and the Bangor winger intercepted to run the length of the pitch for a converted try, leaving the score at 17-7 with 20 minutes to go. This was now a test of character for the visitors and, as what has happened  all season, this team produced when most needed.

Another good passage of play from the backs left Mark Oliver to score again in the  corner, to leave score at 22-7 with 15 minutes to play. Skerries then held on comfortably with a big shift put in by all the replacements, Leonard, Scuffil, Fay Watt, Gordon and Woods. More good news followed as news from Enniscorthy that they had been beaten at home filtered through. Skerries now lead the table, but that will mean little to the team with 6 ‘cup finals’ to go, three away and three at home in the coming weeks.

Big performances by front row of Marrey Cormac , Marrey Con and Sherwin, plus Halligan and Mulvaney in the second row (Mulvaney was outstanding all match and deservedly was the writer’s man of the match), the back row of McAuley, Turvey and Jenkinson played their usual high intensity game and never took a step backwards. Carron and O’Loghlen in particular were outstanding, Lowndes and McGrath combined well in attack and defence. The back three of Jones, Lennox and Oliver chased and tackled all day. This was a huge team performance.

We have Bruff at home next week, in what will be another huge challenge and the team needs everyone’s support at this business end of the season.

(Credit to Gerry Weldon for the great pics)