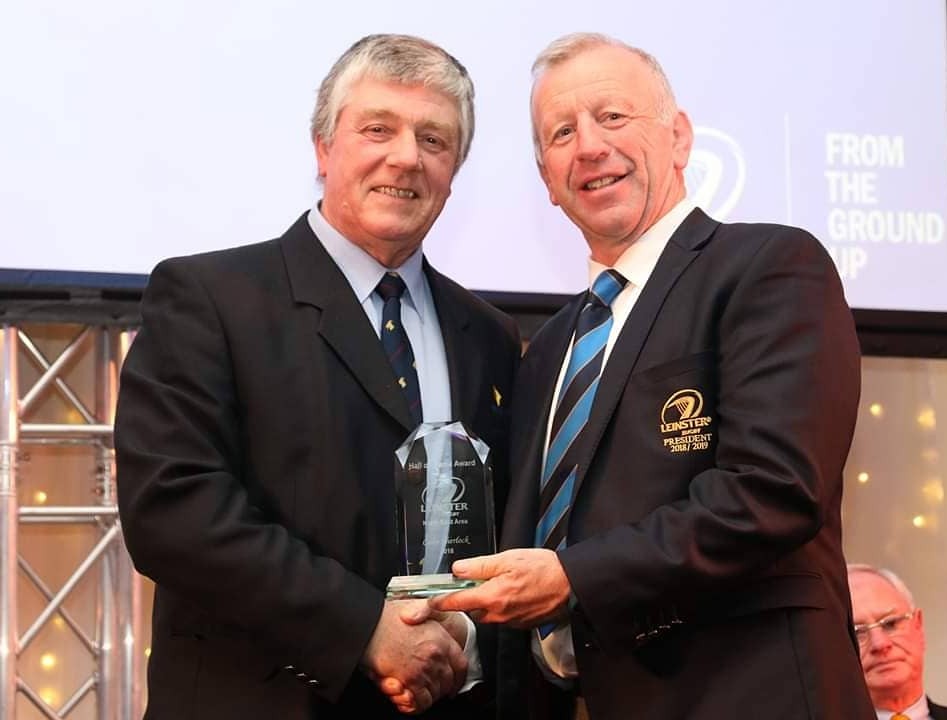 Last Saturday, the 5th of January, in the Ballsbridge Hotel at the lunch hosted by Leinster Rugby celebrating Junior Rugby in the province,.Colm Sherlock was presented with the award as the North East Area Hall of Fame for Leinster Junior Rugby. He was joined in the celebration by twenty two of his playing partners from the ‘70’s and ‘80’s era.

Part of the 1964 original Skerries Colts, who were the first Irish Youths club team organised in Irish Rugby, Colm then played adult rugby from 1967 to 1983.

During this period he was part of the Skerries team that won four Provincial Towns Cups – in 1971, 1972, 1973 and in 1974 when he captained the team. He was also club captain in season 1979/1980.  At the age of 17 Colm was selected to play for Leinster Counties as a Hooker and played for a number of seasons with the Counties XV.

He coached the J1s in 1983/84 and was then promoted to coach of the 1st team in the following season.

Colm is particularly proud of having played in the 1974/75 Skerries team who, by winning the McGowan cup that year, gained entrance to the Leinster Senior Cup, and by beating Dublin University in the 1st round of that Cup, became the first junior club to beat a senior club in the Leinster Senior Cup.  Around this same time, with Colm at Full Back, Skerries won the Dunne Cup, an inter county competition played immediately prior to the Leinster Cup final in Lansdowne Road.  The Dunne Cup was a competition won by a Skerries dominated North County Dublin team on a number of occasions with Colm Sherlock always at Full Back.

Among his many outstanding attributes as a quality rugby player was his ability as a place kicker.  An example of his contribution to Skerries in this regard was in the final of the Provincial Towns Cup against North Kildare in 1973 when Skerries won 12-11 with North Kildare scoring 2 tries (a try worth 4 pts at that time) and a penalty and Skerries replying with 4 penalties – all scored by Colm.

A typical scene during this time was Colm being handed a wet, heavy, slippery, leather football, in his own half, by his scrum half, Jim Dempsey, and instructed to ‘tap it over’ – which he invariably did.

Having retired from playing and coaching, he then gave up his time to the administration of the club in many areas including Chairman of Selectors in the 80’s and Chairman of Rugby in the 90’s.  He was then elected President of Skerries RFC in 2002-2003, a role that he carried out with great distinction.

In later years Colm contributed his professional expertise to the restructuring of our pitch drainage systems and also in the design of clubhouse extensions.

Colm and his wife Frances, (from the McDonough family synonymous with Skerries rugby) provided the Club with three fine players, James, Paul, and current Captain Mike

In Colm, Skerries RFC has a member that epitomises all that is good in our game.  His loyalty to Skerries in declining the opportunities to join a ‘more fashionable club’ is still an inspiration to so many club members. The view of his peer group during his career was that this loyalty clearly denied him the opportunity of playing representative rugby at a higher level.

Our congratulations to Colm on recognition of a distinguished rugby career in not only the old gold, cerise and blue, but also the blue of his Province Leinster.