In late 1925, Bill Hartford, who was then a playing member of Malahide RFC, organised a group of local boys, including Jimmy Duff, Kit Seaver, Dick Seaver, Dick Derham, Christy Fox and himself to kick a rugby ball around the Park on the Dublin Road, and to practise passing, running and tackling.

In the Spring of 1926 a team was got together but played only on Sundays. At that time the vast majority of club rugby in Dublin was played on Saturdays but touring teams such as the Harlequins organised by Jack Arigho of Lansdowne and Ireland were always available for games.

The first game that can be recollected was played against Drogheda on Dick Derham’s field, “The twelve acres”, now part of the Shenick Estate. 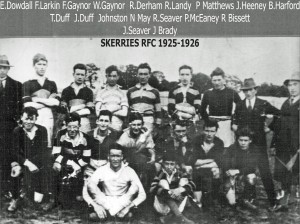 Around the same time in early 1926 there was the famous occasion of a game with Balbriggan when as Tommy Duff kicked off, the ball burst and there was not another one.

As a result Willie Cummiskey had to drive to Balbriggan and get another ball while the two teams waited around, until he got back.

The recollection is that Balbriggan won 21-3.

That game was played in the Mill Field (between the Mill and the Cabra/Hillside houses) which was the property of Mr William Ennis of Clonard, Balbriggan the owner of the Mill. Jimmy Duff and Christy Fox cycled to Clonard one evening in the Autumn of 1926 and persuaded Mr Ennis to allow the Rugby Club the use of the Mill Field, free of charge. At the Annual General Meeting of the Junior Section of Leinster Branch held on 5th October 1926 Mr Christy Fox represented Skerries. Mr Fox was the first Hon. Secretary of the Club.

Hope you will join us as we journey through the years…