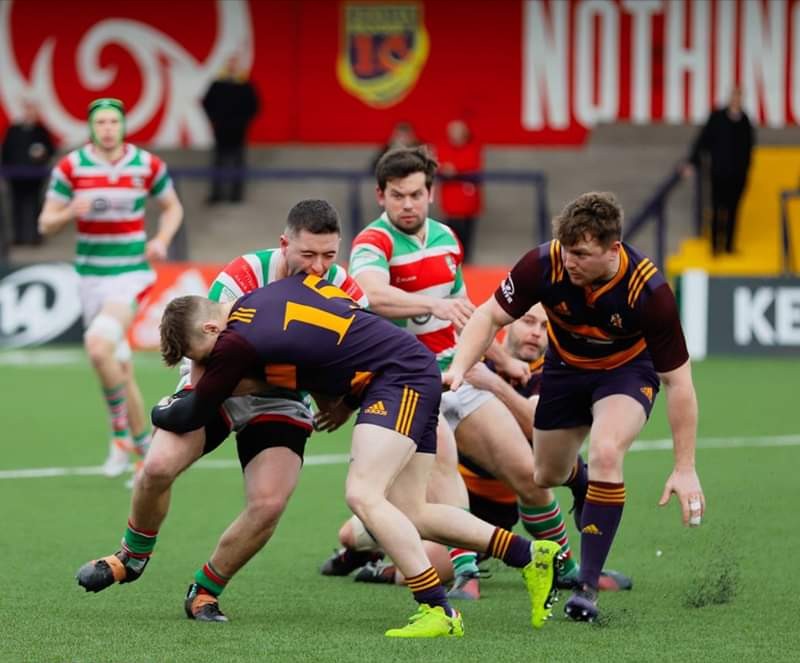 The journey home always seems shorter but the journey from Cork on Saturday passed particularly quickly for the Skerries players and supporters as they brought with them four points to improve their table position to seventh.  On a windless but crisp sunny afternoon, performing on the artificial Musgrave pitch, Skerries withstood the early pressure from a strong, physical home side by a determined commitment  to compete with little regard for their own safety.  The return from injury of their Captain, Mikey Sherlock, with mid-field partner Sean Dempsey performed marvellous work in midfield.  This return allowed Kevin McGrath and Paul Devitt resume their natural positions on the wing and Lorcan Jones occupy the full-back position where his pace and courage impressed.  Scrum-half Eoghan Carron, whose reactions demand complete concentration and support from his back-line, particularly when Skerries are awarded penalties, controlled the game with authority giving out-half Billy Mulcahy opportunity to constantly probe and ask questions of the Sundays Well defence.  Second rows Tom Mulvany and Ross Halligan excelled in the lineout, and were physical in the contact area while the backrow of Michael Turvey, Ben Jenkinson and the outstanding Ross McAuley controlled the breakdown situations and provided a ferocious defence, in particular, a try-saving tackle executed by Jenkinson being the highlight.

A controversial yellow card for McAuley then followed for a supposedly interference of a player in the air. A harsh and somewhat controversy decision which did not please the Skerrries faithful but didn’t negatively affect the drive and commitment from the team.

The last 15 mins of the match tensions and passions were flying high with Skerries pressure and defence phenomenal but unfortunately resulted in another yellow card for Skerries, Turvey punished for a high tackle. McAuley back on for the last phases of play of the match and his presence had an immediate impact. In the final minutes of the match, Sundays Well mounted on the pressure, were awarded a 10 metre lineout. The Skerries pack defended with huge intensity ending in McAuley forcing the turnover and game over!

They survived the onslaught and so well deserved. All credit to Sundays Well, it was a game that kept the crowd on edge right to the final whistle.