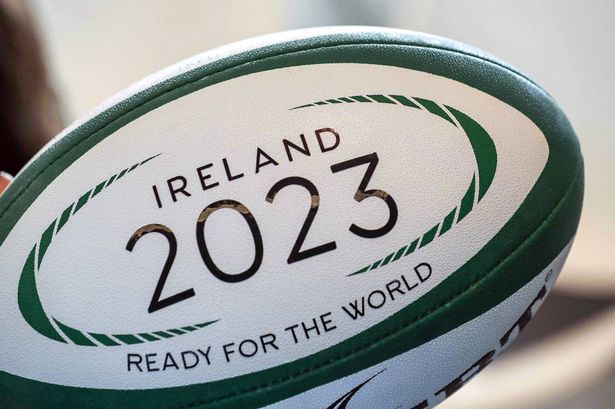 Skerries RFC were bitterly disappointed with not being selected to host the Rugby World Cup (RWC) in 2023. World Rugby had visited Holmpatrick on several occasions and by all accounts were very well looked after – however when push came to shove they listed out a couple of ‘technical’ reasons why they cannot – in fact now – award the tournament to The Goats. Your humble writer has managed to get sight of the final report – in summary:-

Had Rugby World Cup hierarchy visited Skerries on Saturday 18th November one suspects they may well have changed their mind – read on.

The Aborigines have a way at looking at the world – when asked if they were angry with the White Man taking all the land they replied ‘We do not own the Land – we are part of the Land’. In a similar vein nobody has previously or currently owns rugby or even Skerries RFC  – We are all part of it. On Saturday we all found out just how much a part of it we are.

Gerry Weldon was a good rugby player – up in the engine room if I remember rightly – but for many years now he has been a great Photo Man, along with one of the Coyle brothers from Rush. Many years ago I remember Gerry showing slides of photos upstairs in the bar – photos of the old days as they were even then.

For this Saturday – along with his partners in crime – Nicky McD & The Raff – he has taken the photo thing to a whole new level. Photos covering large elements of the history of our great club were displayed for all to see and I believe will soon be available on an online archive – one senses this is only the beginning. If you have old photos to share please get in touch with Gerry and the team.

What most of us did not appreciate until we walked in the room was the vast number of memories we would be confronted with – people you played with (occasionally against), played you only saw playing (when you were a young lad) – occasionally people whose playing careers you only have their (and others) word for. The atmosphere in the room was palpable – all sensed this was a unique occasion – the first time – but hopefully not the last – that this multi-generational group of people were assembled in the one room.

Gathered in the large room were (i) Our President – no not Michael D although he would be welcome – Sharon (ii) One Lion and some internationals – Whigs, Killian, Jim (iii) Some should have been full internationals (in my opinion – you will have yours) – Billy, Ginty, Colm, Kevin Devlin (iv) Some very decent players – Cely, Tim Hegarty, Quirkey (Peter), Nicky Carroll, Ding Dong, Conor McNally (also remembering Ross in Australia who wasn’t half bad either), Monty, Sean Thornton, Copey, Robert McAuley and from my own era – Tom McDonald, Tom Connell, Burkey, Jim Dolan (v) some players turned referees – TP, Nicko…..and then there were a few chancers like myself (the other chancers know who they are so I won’t call them out!) and of course (vi) not forgetting my own Coaches – Matt Connolly, Bill Mulcahy, Tom Ryan, Dimmer, Macker (Gerry McCleery), Jonesy & Leonard (Eric), Gerry Carron, Ray Moran, Aiden Sherlock, Kevin Snr, Nicky – all who helped develop the full back that I became….

You could pick some team from that gathering – but that might be dangerous and get you into tepid water – of course the mind could also play tricks on you and you could try to imagine some inter-generational combinations – Billy throwing into Whigs, a team made up of only Branigans or only Carrons or only Duffs – to satisfy your writer’s imagination and having conferred with my uncle Joe – we also quickly came up with a McD clan team as follows:

Front Row: John, Nicky (some may not realise he started life as a hooker), Leo (Liam)

Half Backs: Nicky (it is a fictional team so I can pick him twice!), Paddy

Centres: Rory, Joe (2 wing forwards but men that could be trusted in the centre to do a job)

Wings: Crego, Kevin Snr (was 2nd row but famously played on the wing for the opposition on his first senior outing and scored 3 tries for them!!)

Full Back and Player/Coach: Kevin Jnr

You will indulge me further if I expand a little on subject matter I claim to know most about- that is full back play.

Maybe it is a natural thing but when I walked in the room all I could see were the full backs – they were everywhere (like any good full back should be – or at least giving off that impression). The full backs I encountered on the day were – Colm Sherlock, Sparky Clarke, Monty Montgomery, Jim Rogan, KMcD (if encountering yourself counts!) and the great Willie Jenkinson – others who appeared in the photos but not present on the day – Bash (Paul), Bash (Michael – a No. 10 but was well able to play at 15), Michael Price, John ‘DIF’ Davy – some other people may have adorned the No. 15 shirt on occasion but a pure full back knows another pure full back when he sees one.

From a previous article I wrote on the ‘Rules of Rugby’ – I used the following definition:-

In the same article I went on to pick a Best Team (in my opinion) from people I either saw playing or played with (anyone under 40 or over 70 please note) – this is what I penned at the time:-

So to conclude we will be hosting a Full Back’s Convention early next year in The Shelbourne Hotel – all expenses paid. Serge Blanco will be our first guest of honour and in the years to follow we also hope to get Andy Irvine, Tom Kiernan, Dick Spring, Conor O’Shea, JPR, Percy Montgomery (Joey’s cousin) – all (full backs) welcome!!

All repaired to the bar upstairs and downstairs to catch up on the old days – all were grateful to be asked and to be there – a big gratitude to all involved in coming up with the idea and then organising it. Rumour has it this group will be seconded to the working group looking at RWC 2027 – I can have a word with Dick when I see him at The Full Back Convention – maybe we will have the hotel by then!

My daughter Harriet is making her full International debut this Saturday (vs. Argentina) – after years of listening to her Dad go on about matches Joe Schmidt finally made the call.