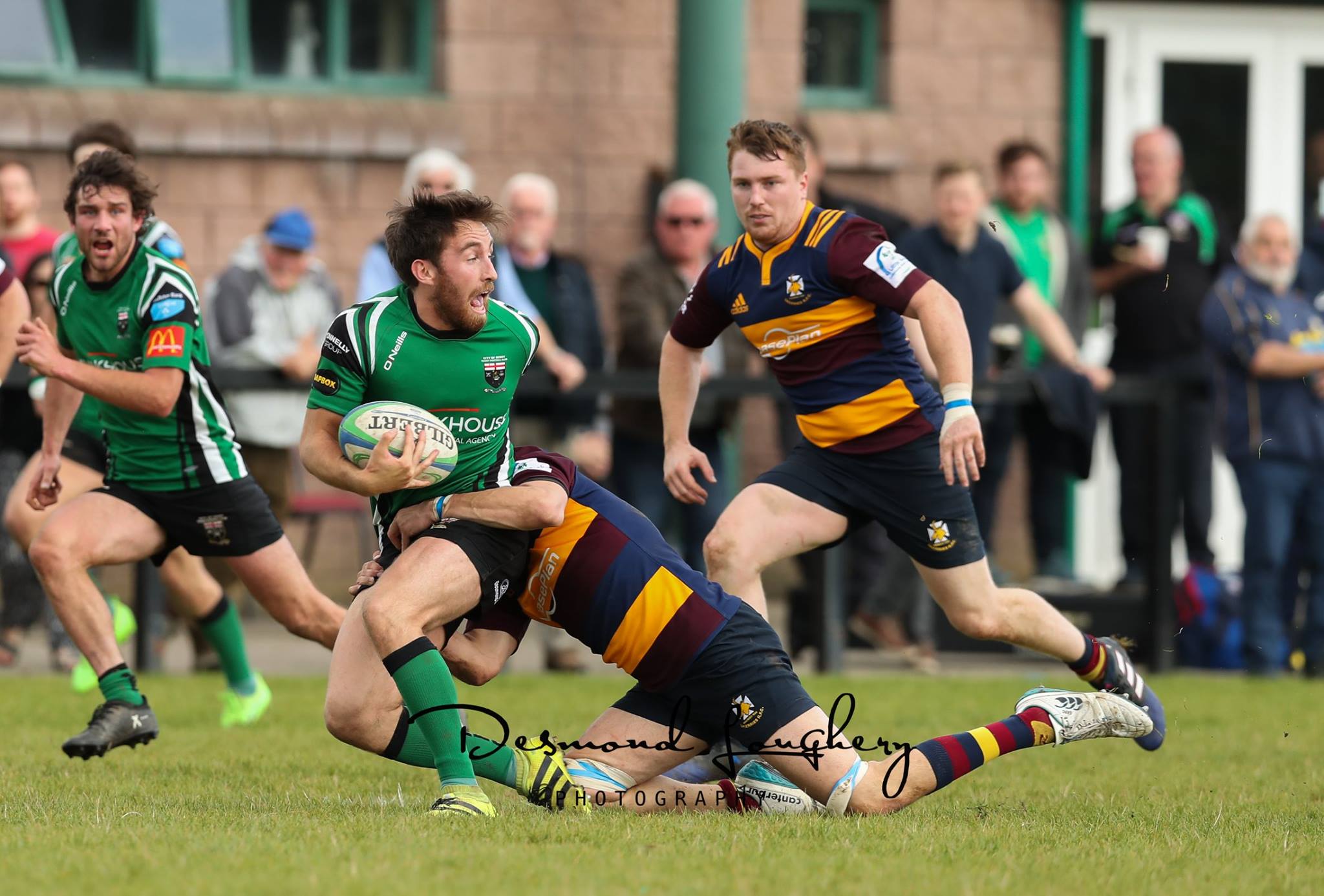 As the autumnal sun shone on the City of Derry last Saturday, Skerries 1st continued their great start to the season with a win in the AIL Division 2B game away to City of Derry RFC.

Kitted out in their new strip and led by their Captain Mikey Sherlock in a Man of the Match performance, the team played to their strengths and came away with 6 tries.

Three of the tries were scored by the Marrey Brothers Conn(1) and Cormac(2) both of whom played very well till Conn retired with an injury.

Skerries playing into the elements scored a try after three minutes following good handling and a break by the Captain. This was followed by a penalty converted by Billy Mulcahy.

On the 15th minute mark City of Derry’s David Graham scored a try.

In the 27th minute a break by Dara Lownes and inter passing and off loads with Mickey Sherlock and Tom Mulvany, Cormac Marrey scored a try converted by out half Billy Mulcahy.

Two conceded penalties gave the opportunity for out half Neil Burns to put six points on the board for City of Derry. Half time saw Skerries leading 15 points to 11.

The second half continued with more tries being scored by Chris Tonge (2) who had a brilliant game in the front row supported by his loose head prop, Cormac Marrey, who also scored a try in the 40th minute.

The half started with a penalty conversion by Billy Mulcahy.

Following this score the half backs of City of Derry started to control the breaks for their team by quickly tapped penalties which were causing problems for the Skerries defence and resulted in a number of yellow cards for their players.

On 50th minute mark, City of Derry following a maul scored a try and a conversion, this was followed in the 64th minute by a try for Skerries by Chris Tonge.

Three minutes later D Graham scored a try for City of Derry and this was converted.

73 minutes on the clock, Left wing, Paul Devitt made a good run and following a ruck the ball went through the Skerries backs hands and was finished off by Maurice McAuley on the right wing in some style.

Then with three minutes left of the match, Skerries Captain, Mickey Sherlock from inside his own 22 metre line sprinted off down the pitch and this also included some body swerves that a ballet dancer would be proud of!

He did not make the try line but in the follow up play Cormac Marrey scored his second try leaving Skerries the winners 38 points to 25. This earned Skerries 4 points for the win and a bonus point for scoring 4 tries. This leaves Skerries in a great position after three matches played at 12 league points on the table. Very well done to all involved on a hard fought victory.