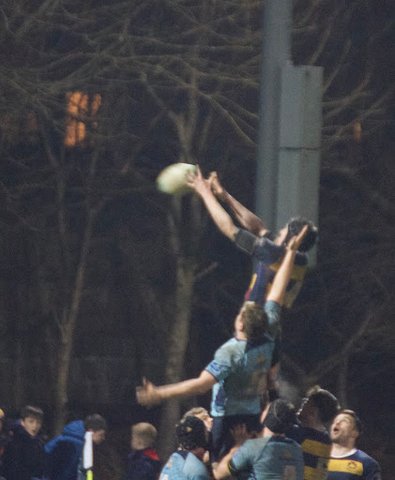 Skerries suffered a disappointing defeat to Barnhall in Ulster Bank League Dib 2B last Friday night. In near perfect conditions under floodlights at Holmpatrick, and before the typically large home crowd, some early promise from Skerries gave way to a rearguard action for much of the second half. In truth Barnhall were the deserved winners and might easily have left with more tries, meaning that the bonus point Skerries picked up may yet prove very valuable in the fight against relegation.

Skerries made a couple of significant changes in personnel coming into the game, with Ben Jenkinson starting in the back row and Lorcan Jones coming in a full-back. Meanwhile, Conn Marrey stepped in at hooker – playing alongside his brother Cormac in the front row.

However, within two minutes a reshuffle was needed when centre Colin Doyle left injured, and Jones stepped in to the role, as Maurice McAuley went in at full back.

Those early exchanges were even enough, with Skerries testing Barnhall’s defence at the fringes of the ruck, and often breaking the line as a result. One barnstorming Lorcan Jones run from deep swept Skerries halfway up the field.

But Barnhall also had their moments, especially when feeding off Skerries mistakes. Jenkinson put in one try-saving tackle in the corner, while an interception by winger Eddie O’Mahony stopped what would have been a certain Barnhall score.

Thanks to a string scrum and useful line-out, Skerries began to put pressure, missing a couple of penalty kicks but gaining an advantage when the Barnhall out-half was sin-binned for repeated infringements.

Turing over a Barnhall scrum five metres from the line, captain Ross McAuley pounced to score the opening try, which was converted by Billy Mulcahy.

However, despite this would prove to be the highlight of the night from a Skerries perspective. From there on they were under pressure, and eventually conceded a try on the stroke of half-time. Their strong defensive effort was undone by the concession of a penalty, and when Barnhall tapped quickly the broken play led to them getting a try that levelled the scores at the break.

They scored early in the second half to take the 14-7 lead, and while Skerries briefly threatened their line after that, a lack of composure saw Barnhall get out of their half unharmed.

The final 30 minutes of the match were then played almost entirely in the Skerries half, where Barnhall failed to take two clear opportunities for tries, and Skerries were reduced to 14 men for 10 minutes, and ultimately Skerries escaped with a point.

On the same weekend, the Skerries under 18s were defeated in the Premier League final by a strong Carlow side. However, the under 20s continued their strong league campaign by defeating the leaders Tullamore 14-12 in a fractious match at Holmpatrick.

This Sunday, the Skerries J1s play holders Wicklow in the semi-final of the Towns Cup. The cup run of this Skerries second team has continued the Goats’ great tradition of success in that competition.