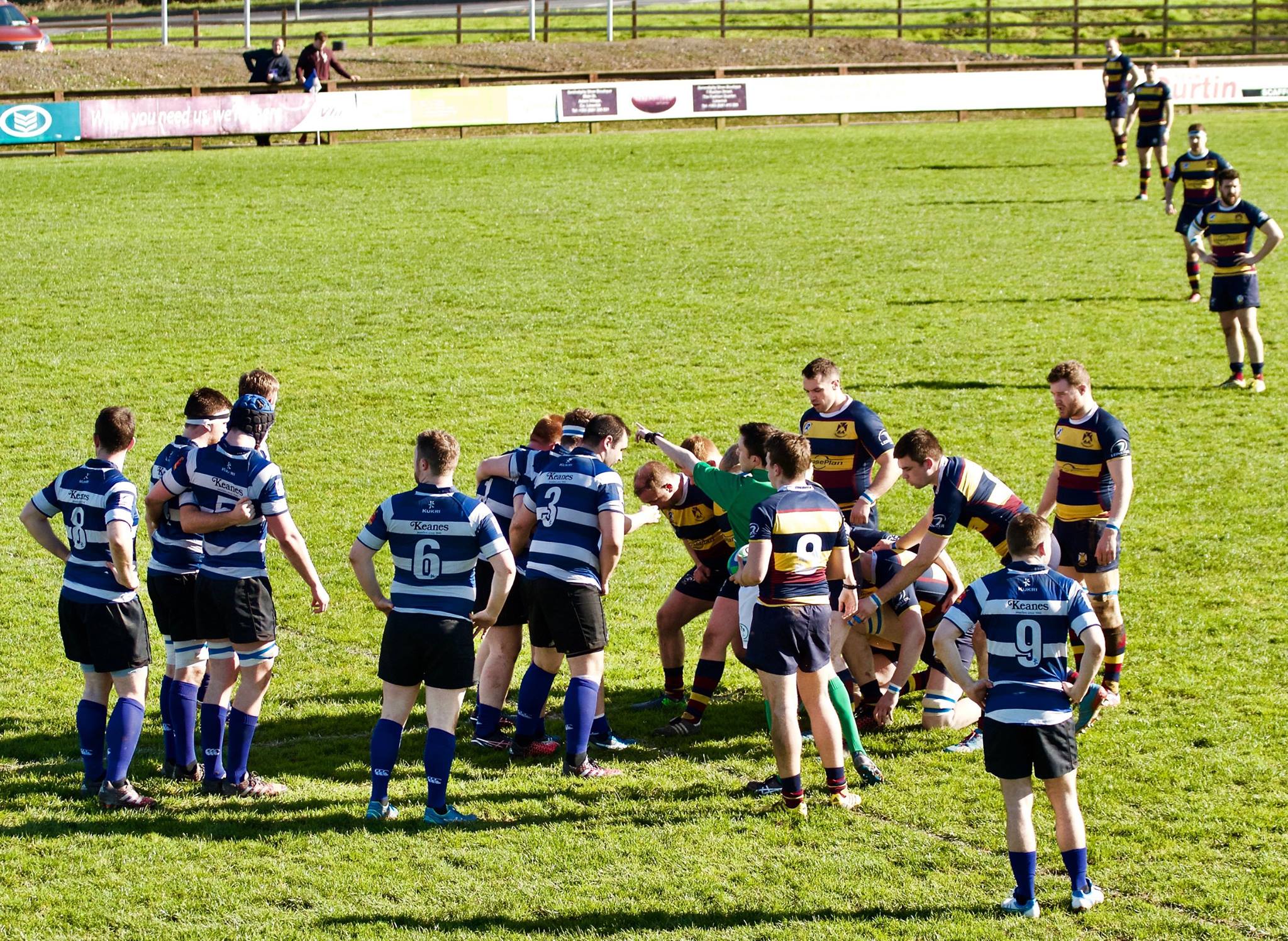 Skerries and Old Crescent lined out in Rosbrien on a beautiful Spring day with very different priorities. The home team were attempting to consolidate their position in the top four in order to qualify for the promotion playoffs, while the visitors aim was to move clear of the scrap to avoid the relegation playoff spot at the other end of the table. For long periods, however, the casual observer would have been hard pushed to tell which team was struggling as Skerries matched anything that was thrown at them and provided much of the quality play, particularly in the first half.

In an entertaining high tempo game both teams showed ambition in moving the ball along their respective backlines. Old Crescent were seeking space out wide, while Skerries, with outhalf Mulcahy pulling the strings, were more inventive in their lines of running in midfield. A number of promising line breaks were created in the first quarter and in one of these Mark Oliver scythed through the Old Crescent defence in a jinking run from halfway which took him up to up to the opposition 22 but lack of support meant Skerries were unable to exploit the opportunity.

Skerries did strike the first blow after 10 minutes however when a loose pass from Old Crescent around halfway was hacked on by Devitt, who went on to outpace the cover and demonstrate some good football skills to control the ball and dot down wide out on the right. Mulcahy’s attempted convert was narrowly wide.
There followed a period of pressure by the home team but the Skerries defence was unyielding, with Dempsey, Doyle and flankers O’Hare and Turvey prominent in stifling any threats and a penalty from 25 metres out, converted by outhalf Shane O’Brien, was their only reward.

Skerries, superior in the scrum in this opening period, extended their lead in the 26th minute when Ross McAuley burst through on halfway and took the ball up to the 22 in a typical barnstorming run. This time Doyle was there to provide the support, the pass was perfectly executed and the centre had enough pace to beat the last defender and make the line comfortably. Mulcahy made no mistake with the conversion to leave Skerries with a 12 -3 advantage.

Almost directly from the re-start however, Skerries conceded another penalty which was duly converted by O’Brien. Skerries returned to the attack and following several phases an opportunity was created wide on the left. However, in trying to find Oliver, who was in space on the touchline, Mulcahy threw a looping pass, but instead of reaching its intended target, the ball was intercepted by the Old Crescent right wing Val McDermott who raced unopposed from his own 22 to score wide out. The conversion was missed but from a position of relative comfort Skerries were now only one point in front.

A fine 35 metre penalty from Mulcahy extended the lead but from the re-start Skerries took the ball back into their own 22 and kicked out on the full to concede an opposition throw on the 22 metre line. From the resultant lineout the Old Crescent pack gained immediate traction and trundled steadily towards the line. Skerries were unable to stop their progress and hooker Darragh O’Brien was credited with the score. The successful conversion left the home team 18 – 15 in front approaching the break.
Within five minutes of the resumption came controversy and a turning point in the game. Old Crescent attacked up the left and following a phase of play, which included an obvious forward pass and an apparent knock on, they were awarded a very dubious try in the corner scored by Cathal Monaghan and converted by O’Brien.

From this point on Skerries faced an uphill battle and despite dominating the next twenty minutes of play they failed to add to their total. Opportunities were created but were squandered by some loose play and lack of patience when in good positions. The concession of two converted tries in the final five minutes, when tiring legs caused the defence to lose its shape, gave a lopsided look to the scoreboard which flattered the hosts and did not do justice to the efforts of this young Skerries team.
Despite the scoreline, there were a lot of positives in this performance both in terms of attitude and performance and the younger members of the squad are looking more comfortable with each outing. The contributions of Mulvany and Marrey in the pack and Oliver and Mulcahy behind were encouraging and replacement wing Dave Goodman looks a real prospect for the future.

Results elsewhere mean that there is no change in Skerries position in the league table and their next game is at home against Barnhall on Friday 24th March at 8.00pm.