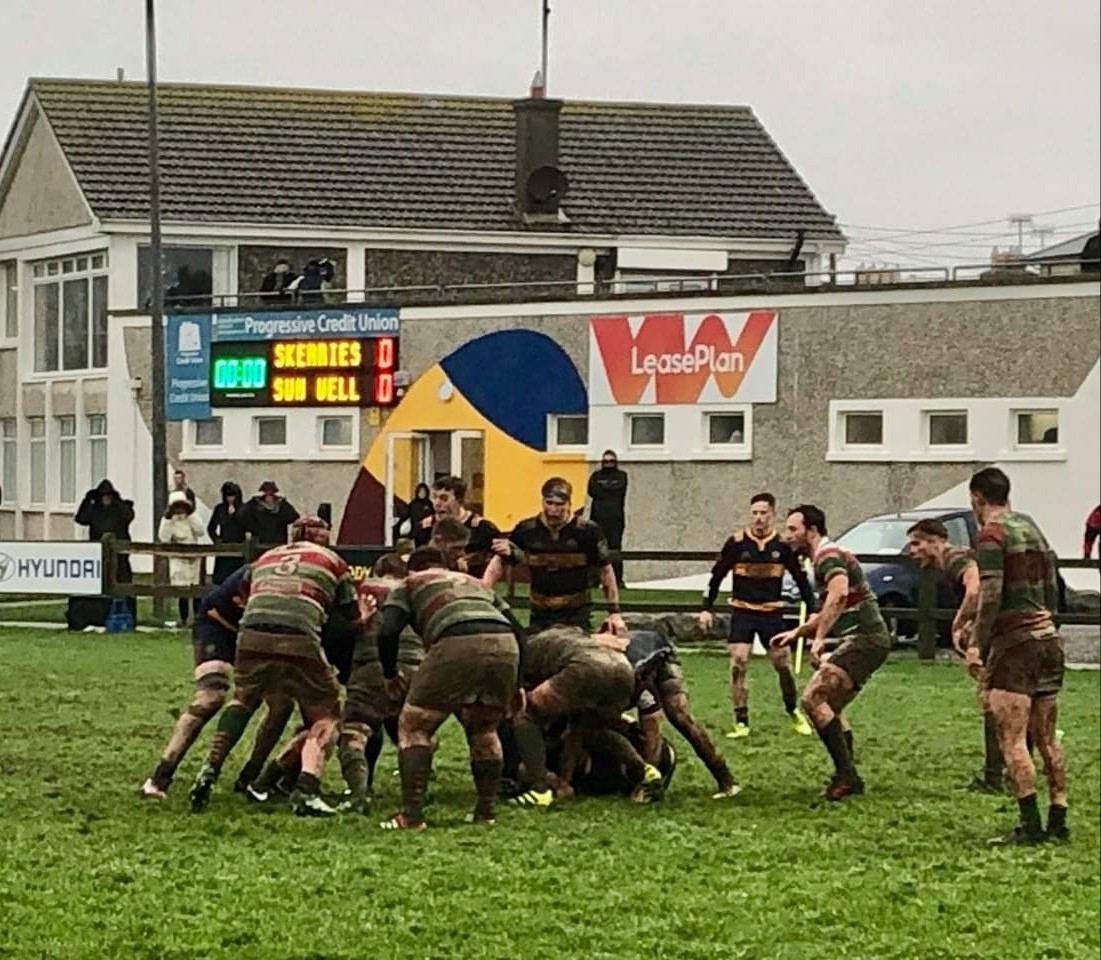 In a game played in apocalyptic conditions Skerries deservedly won their first match of the season and in doing so moved off the bottom to 8th  place. This was a result, coming on the back of a resilient performance the previous week in Belfast, where several U20’s players featured prominently.

The match started in a torrential downpour which never stopped. Skerries kicked off and Sunday’s Well maintained possession for 35 minutes with very few mistakes which is a testament to their skill level in the difficult conditions. There is little more to report in the first half except that Skerries tackled like demons and at 0-0 at half time after playing with the wind, the signs looked ominous for the home team .
The second half started with Skerries attacking out wide and this continued nonstop for the half. McAuley, Turvey, Murphy and the returning Joe Glennon all showed up prominently in attack. The half backs Carron and Mulcahy managed the match and the conditions excellently, Sean Dempsey’s work rate was immense and the elusive skills of McGrath was a constant threat to the visitors. The lineout was a lottery in the conditions and most of the home team’s best plays came in open play with excellent rucking.

With 15 minutes to go the decisive play was manufactured. Skerries got a penalty which was rejected for a quick tap and after a monstrous break by the returning winger O’Mahony, McGrath excellently scored in the corner and Mulcahy nearly converted from an impossible position. For the following 12 minutes Skerries continued to dominate and on two occasions they nearly breached the line again following an excellent break by O’Mahony.
With three minutes to go Sunday’s Well got a penalty which they managed to manoeuvre inside the Skerries 22 and for the next three minutes pounded the line. The home team defended monumentally and a maul ensued and Skerries were awarded a scrum on the five metre defensive line. The ball flew out of the scrum and to everyone’s relief the ball went dead and the match concluded. There was huge relief for the home team and supporters as the first win was achieved.

This young team deserve huge praise for their performances in the past few weeks and it is great to see their luck is turning. Huge credit must go to the whole squad and the coaching team for continuing to play an attractive style of rugby in difficult conditions. The performance of the Second team (unbeaten in the league) has also greatly helped. A deserved break for all over Christmas.

As for a man of the match it would be impossible to pick one candidate as all 20 players played their part. The brothers Marrey and Scuffil worked tirelessly, Halligan and Mulvany carried and tackled well and the introduction of Glennon brought experience to the team. The back row was immense and the tackle count of Jenkinson was huge as usual. All the backs played their part Devitt, Jones and O’Loghlen did their jobs excellently when called upon.

Overall a great end to the first half of the season and with more players now returning we can look forward to climbing up the table.