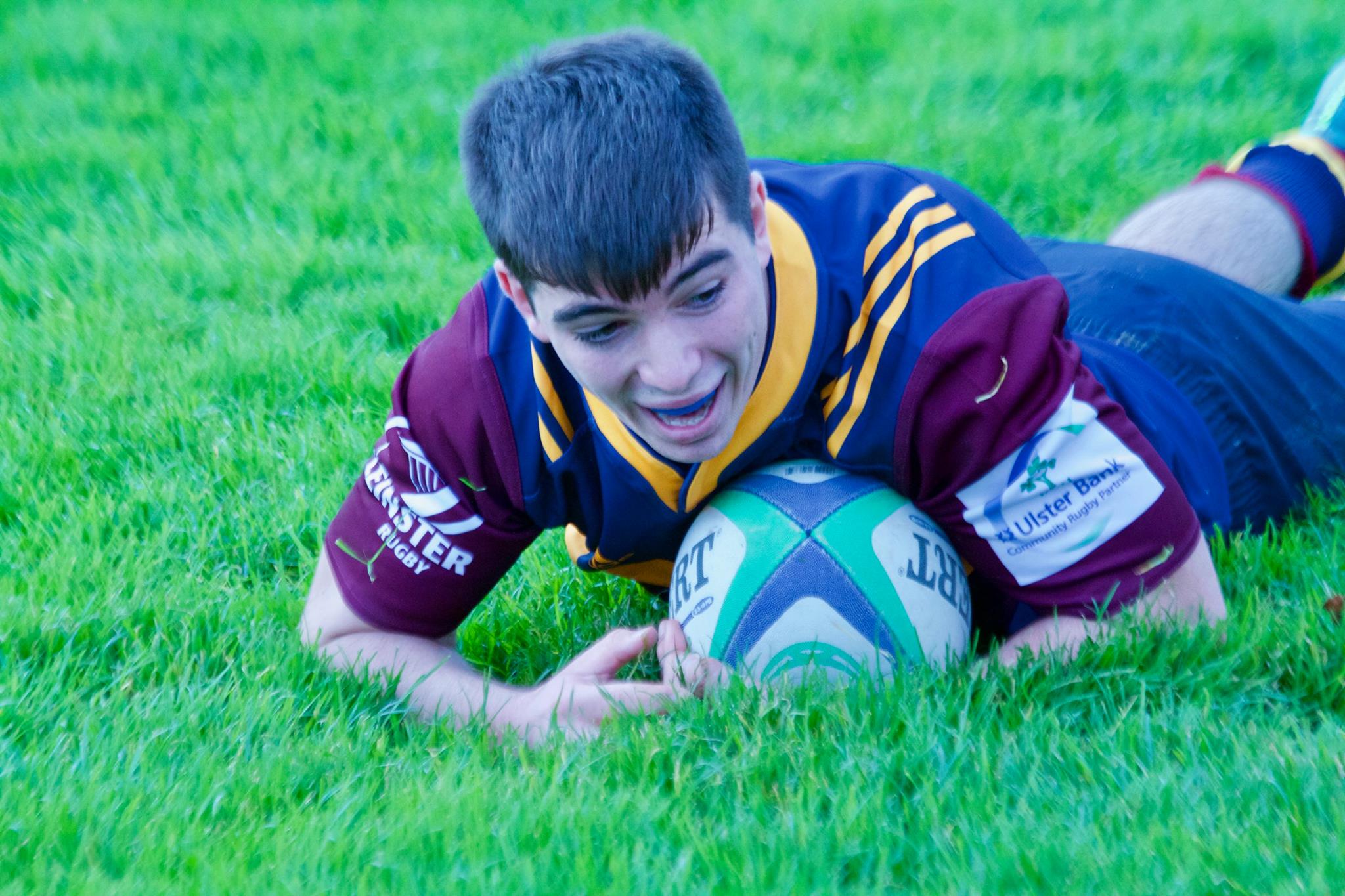 In windy conditions Skerries RFC welcomed Sundays Well RFC to Holmpatrick on the last Saturday of October for their Division 2B Ulster Bank League game.
Right from the kick off Skerries playing with the strong wind put the visitors under pressure, who conceded a penalty at a ruck after 3 minutes and which was converted by outhalf Billy Mulcahy giving Skerries RFC the lead.
With the clock approaching 12 minutes some wonderful accurate passing by Skerries backs led to a ruck inside Sundays Well 22 meter line.  Skerries won the ruck and Number 9 Eoghan Carron put a delicate kick into space which Kieran Leonard gathered and off loaded the ball back to the Number 9 who scored the try which was duly converted by outhalf Billy Mulcahy.
On 27 minutes following pressure Skerries were awarded a penalty for an infringement at a ruck but the shot at goal went narrowly wide.
On 30 minutes a line out to Skerries on the Sundays Well 22 meter line was lost and from the resulting ruck the outhalf for Sundays Well, Eoin Geary evaded a number a potential Skerries tacklers to score a try under the posts which he converted leaving the score 10 Pts Skerries 7 Pts Sundays Well.
This try garnished the Skerries team to immediately respond by winning a line out from a kick to touch by the Sundays Well No.10 Eoin Geary following the kick off.
From the lineout Scrumhalf E Carron passed to B Mulcahy who passed inside to No.7 B Murphy who went to ground .
Skerries won the quick ruck ball and once again scrum half E Carron passed to outhalf B Mulcahy who passed to Dara Lowndes he found winger Paul Devitt and with a hand off on a defender the winger scored a try that was duly converted by B Mulcahy with 38 minutes on the clock.
Half Time saw Skerries RFC leading 17 Pts to Sundays Well 7 Pts
In the second half Sundays Well playing with the wind put the Skerries team under severe pressure both at the scrums and with their running game.
However due to a number of persistent offences being committed by Sundays Well yellow cards were given to a number of their players for their transgressions.
The Skerries team lead by their Captain M Sherlock deserve high praise for their discipline during the match.
Stout defence by the Skerries forwards at four reset scrums defending their line resulted in the awarded of a Penalty which was dispatched to touch.
This was a crucial turning point in the game,
Some wonderful turnovers at the rucks by Kieran Leonard who had to start the match in place of No 8 George Harrington who injured his hand in the teams warm up.  This was a big disappointment for him as he was due to return to the team following his recovery from a previous injury.
Last ditch tackles by Chris Tonge, Maurice McAuley Captain Mickey Sherlock and one cracker of a tackle by Lorcan Jones brought loud cheers from the home support and galvanized the Skerries team to achieve greater strength in their defence some of the tackles made saved certain tries being scored by Sundays Well.
During the defence on their line there were two tremendous sprints out of defence up the field by Dara Lowndes and Maurice McAuley and Lorcan Jones that just failed to be converted into tries.
There followed from the 75 minute to the 79 minute a passage of play by Skerries who following winning a number of rucks and carries by Kieran Leonard and Chris Tonge the ball was passed to the right by the backs and from the resulting ruck Mark Nally released the ball to the Skerries scrumhalf who with a swift and accurate pass the back line with good running towards the try line Ross Gordon passed the ball to Winger Paul Devitt who scored his second try of the match.  The conversion was missed from the difficult angle and the strong wind was also against .
This left the score in the match at 22 Pts Skerries RFC – Sundays Well 7 Pts to the final whistle.
With this win Skerries RFC maintain their second place in the League table
Well done to all involved and get ready for their next AIL League Match which is against League leaders Old Crescent RFC away on next Saturday the 4th November.