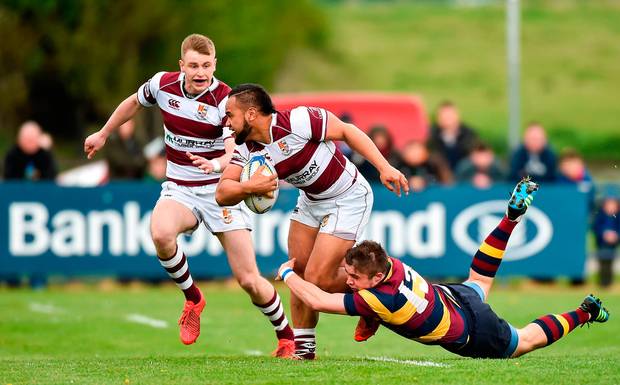 The score line was probably unjust to Skerries who bravely battled away in the Towns Cup final against a Tullow side fully deserved of their maiden victory. Having beaten Wicklow in the semi final, Skerries needed to produce a similar performance to take home the coveted trophy but in the end surrendered to a fully committed Tullow side who had Sean O’Brien on their coaching ticket. Skerries were forced to make changes to the starting team that beat Wicklow due to injuries of the influential Billy Mulcahy who was injured playing with the Senior XV in Dungannon the previous week and Dean Harford but can be proud of their performance.

The game was hosted by Athy Rugby Club and both teams brought their vocal support to add to this fine occasion. Skerries started with the breeze in their favour and took the game to Tullow. Within five minutes Skerries pressed the Tullow line looking for the first score. Some great work by the pack edged them close to the Tullow line but when the ball was released out the back line, Tullow’s Richard Nichols intercepted a pass and ran the length of the field to score under the post. The easy conversion was added to make the score 7-0 to Tullow. Skerries regrouped from this setback and continued to take the game to Tullow but were confronted with a defense that proved unbreakable. On 25 minutes, Robbie Jenkinson reduced the deficit with a penalty. Five minutes later Skerries were awarded a second penalty with the resulting kick just passing the wrong side of the post. Ben Jenkinson was proving vital in the line out but Skerries could not break down a well organised Tullow side. Two minutes from half time, Tullow provided the sucker punch after a well worked line out saw Stephen Smith barge over the line to give Tullow a 12-3 half time lead.

Skerries needed to get the first score in the second half and while they tried to break down the well organised Tullow side, they found themselves being pinned back on their own line time after time. On forty seven minutes, Tullow were awarded a penalty with they duly opted to go to the corner. The resulting line out was gathered and after some good work, Tullow’s Dylan Leybourne went over in the corner unapposed to make the score 17-3. The difficult conversion was missed but probably ended Skerries hope of a win. Ben Jenkinson went off injured and was replaced by Darragh Joyce, while Eoin O’Byrne and Ross Halligan replaced Neil Martin and Trevor Scuffil. Skerries tried to reduced the score line but were denied on each occasion. Tullow were awarded a penalty on 60 mins which they duly converted to make the final score 20-3.

Skerries will look back on this game and reflect at not performing to their best on the day but can be throughly proud of reaching the Towns Cup Final which is such a difficult competition to win. On the day, Skerries were beaten by a well organised Tullow team and were deserving winnners.

Skerries have won this great trophy eleven times over its long history and while the number of appearances have been limited lately, it was great to see Skerries return to the final and hopefully next year they can make it a winning one.

Thanks to Athy Rugby for hosting a great day for both team and supporters.