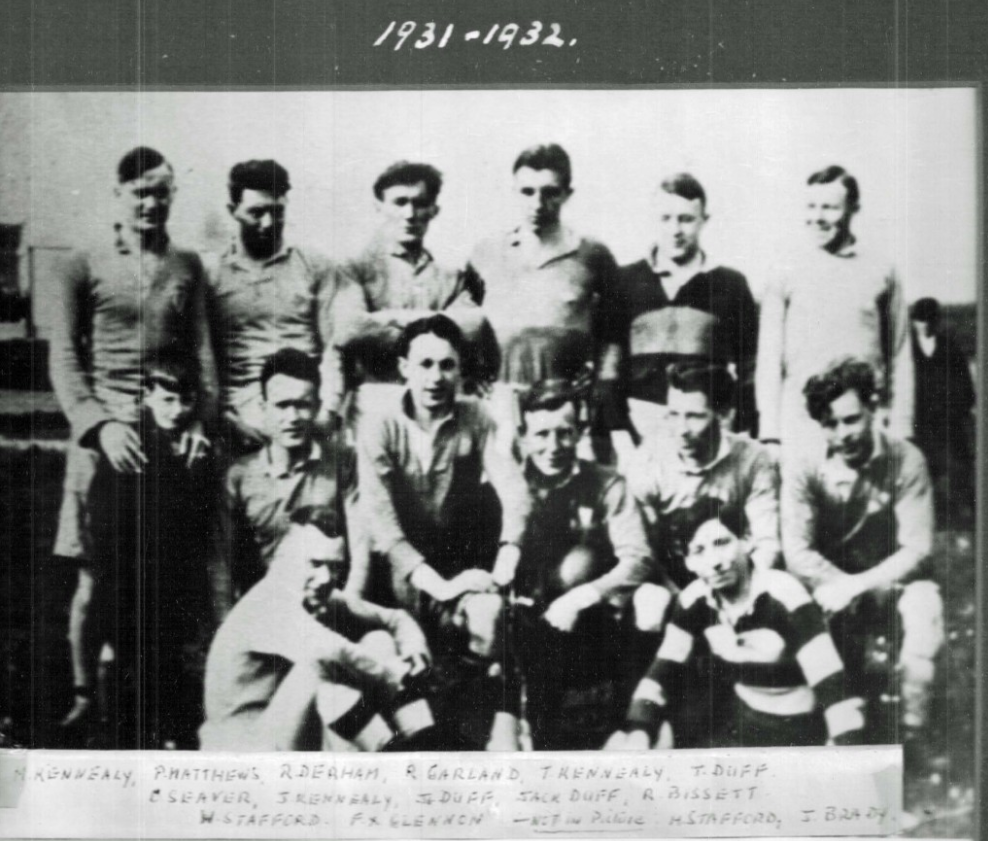 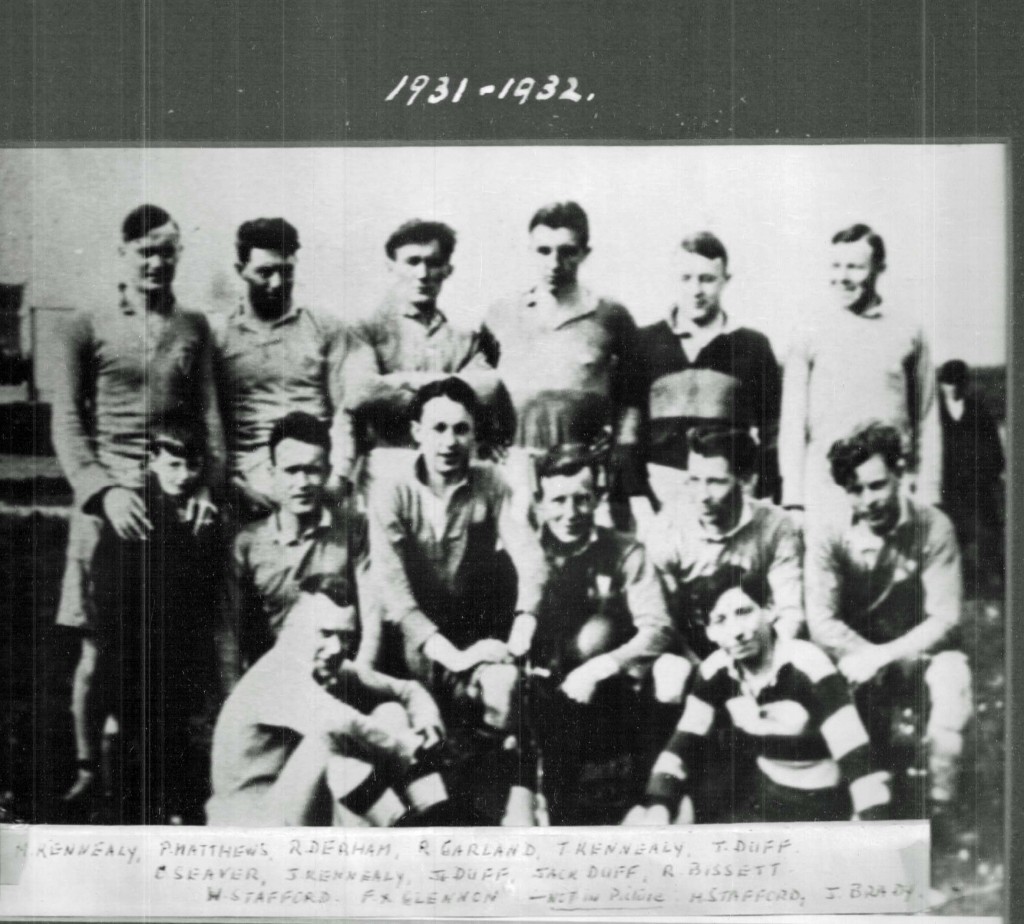 In the Provincial Towns Cup 1931  Balbriggan  were drawn to play Skerries in Balbriggan on 21st March. With the winners to play winners of Rosslare and Co Carlow in Dublin on 28th march. Balbriggan won and Skerries objected on grounds of an ineligible player.

However, before the objection was heard Balbriggan had beaten Co. Carlow and were into the final. The junior committee on examining the situation found that a Mr Thomas Larkin, a member of the Garda Siochana, residing in Dublin had played for Balbriggan and the junior committee recommended that Balbriggan be disqualified from the competition. Co. Carlow were given Balbriggans place in the final and won the 1931 Provincials Towns Cup. 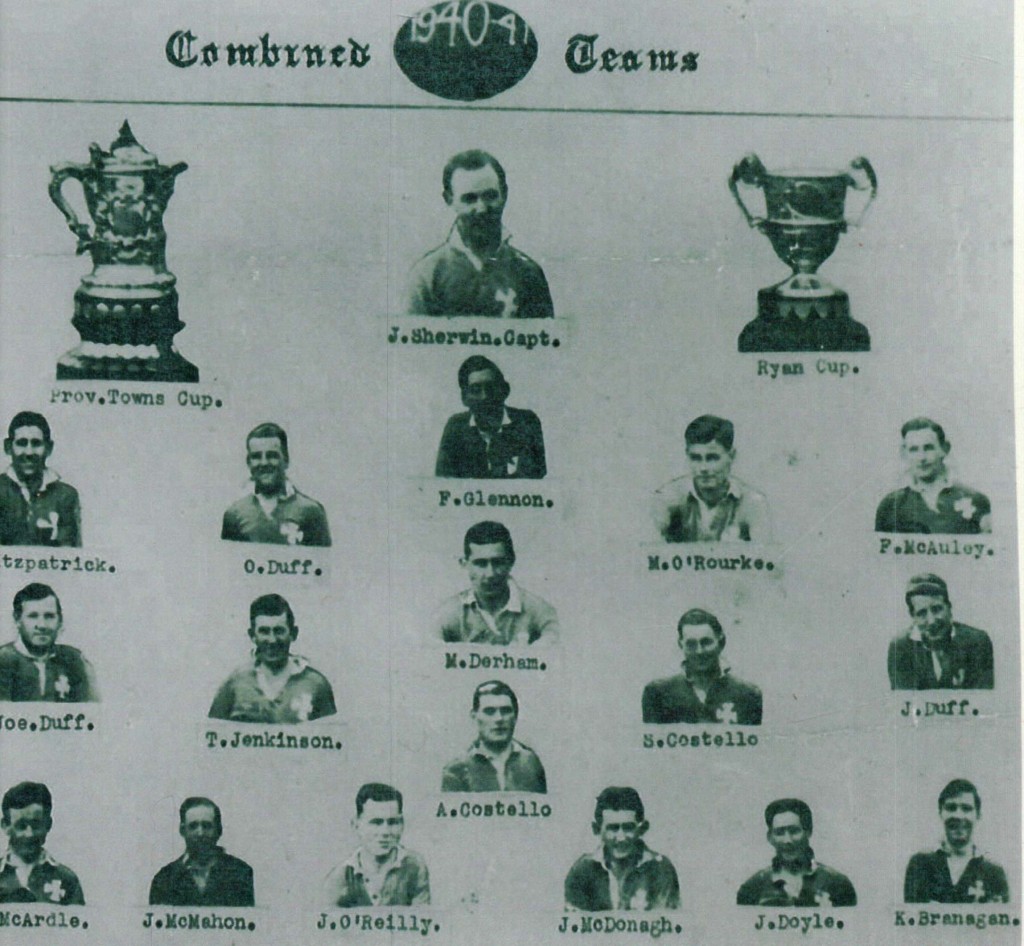 Under the captaincy of Joey Sherwin, one of the finest out-halves ever to play for the Club, Skerries won the Provincial Towns Cup for the first time by beating Wexford Wanderers 7-5 at Lansdowne Road. 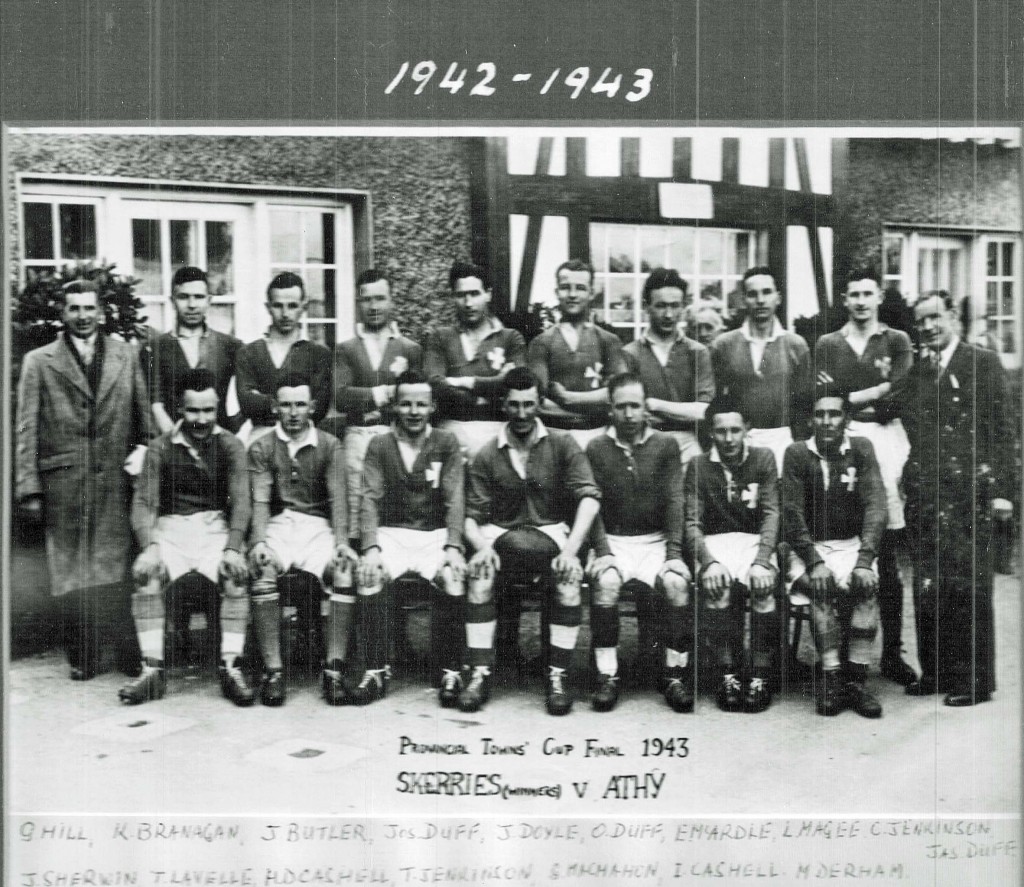 The club was captained by Tommy Jenkinson, who during the successful 1941 campaign had been observed by a member of the then vigilante committee and suspended from the GAA, thus jeopardising his position as a member of the Dublin county panel. He was not the only Skerries player so affected at the time and a number of players were appearing each week – and with different names depending on which code they were playing. Despite this, Skerries under Tommy Jenkinson went on to win the Provincial Towns Cup in 1943 by defeating Athy 4-3 at Lansdowne Road. Athy had led 3-0(a try) for most of the game and Joey Sherwin the Skerries out-half dropped a goal (4 points) in the closing minutes. 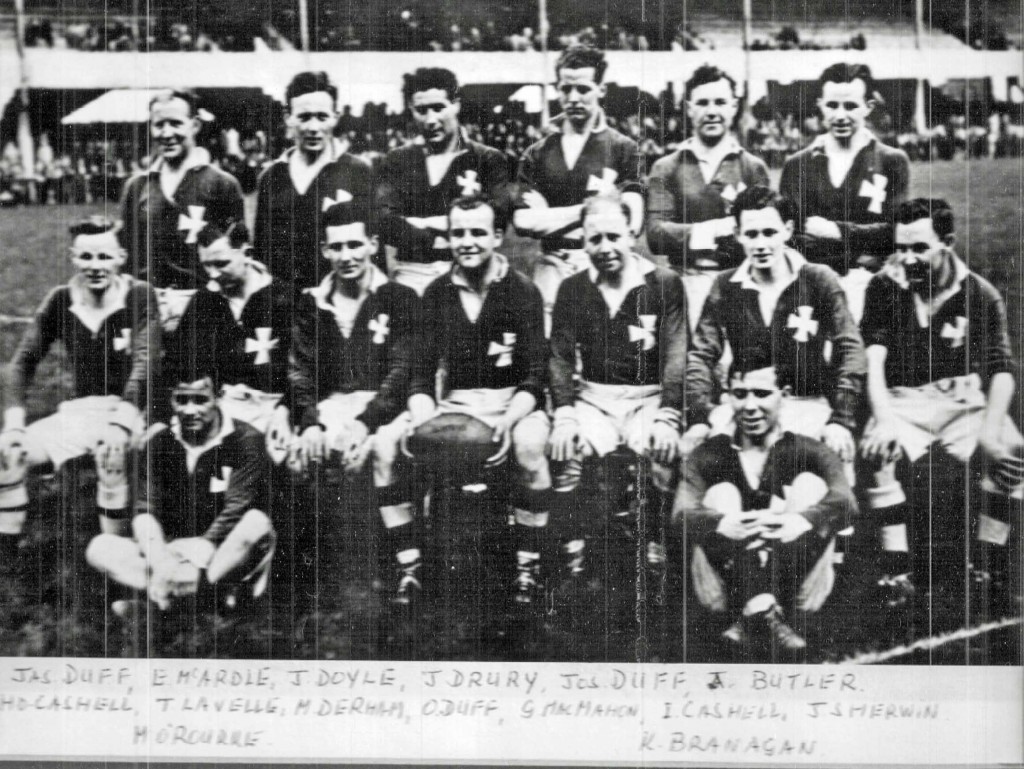 The club was captained by Oliver Duff and went on to win the Towns Cup for the third time by defeating Curragh second team 17-0 at Lansdowne Road. During the war years the Curragh first team played in senior ranks. 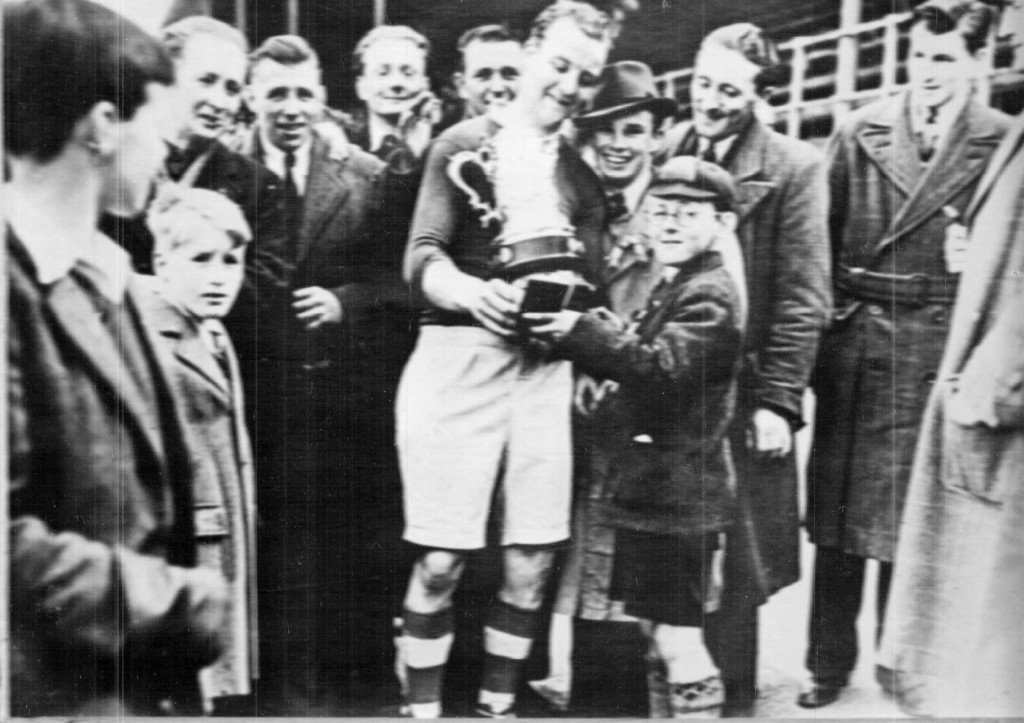 In the 1945/46 season, under captain Johnny Drury, Skerries were unlucky to be beaten in the final of the Towns cup 3-0 by Tullamore at Donnybrook. Incidentally Bobby Beggs was a leading player in the 1946 cup campaign. 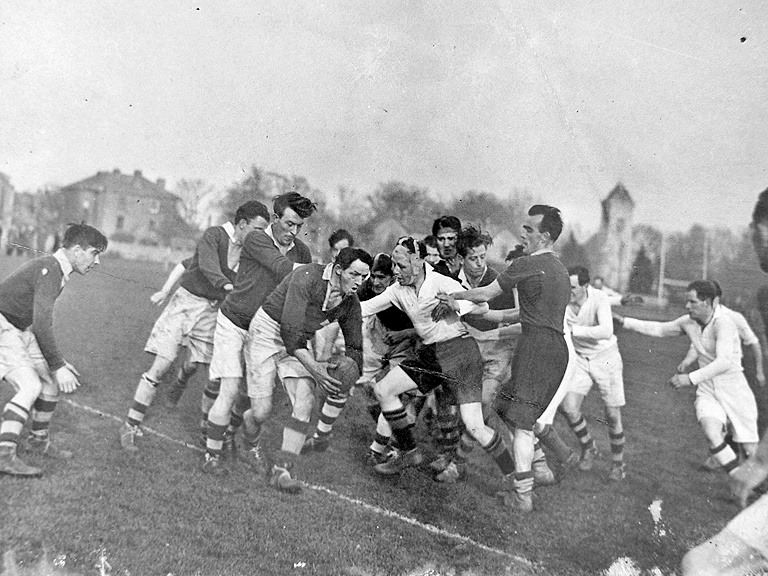 For the season 1949/50 Des Cashell was captain. Tony Robertson who had recently helped Wanderers win the Leinster Senior Cup in 1948 joined Skerries as out-half. Skerries reached the final of the provincial towns cup against Rathdowney and after a 3-3 draw in the first game, won the replay 3-0. 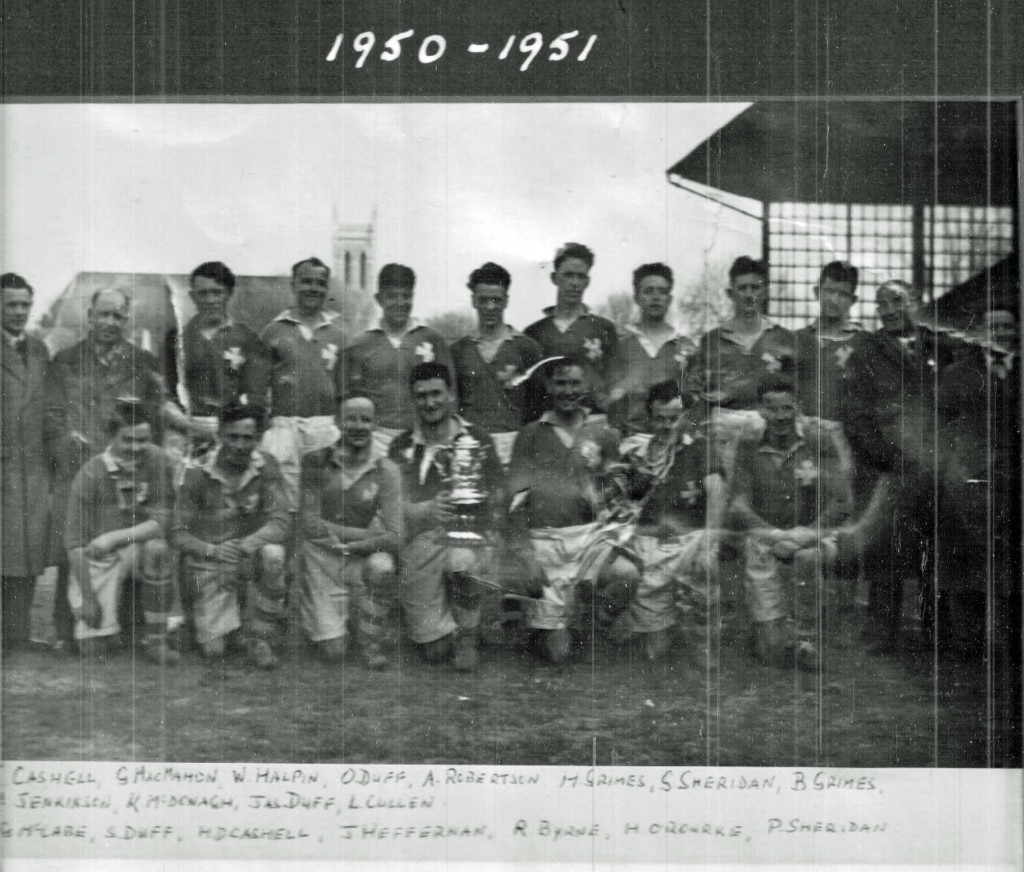 Ivan Cashell was captain. However mid-season he was transferred to Sligo and vice-captain John Heffernan took over. In the semi-final of the Towns Cup Dundalk and Skerries played each other on four separate occasions before Skerries were winners of the fourth game played at Sydney Parade and went on to win the final beating Rathdowney 12-0. 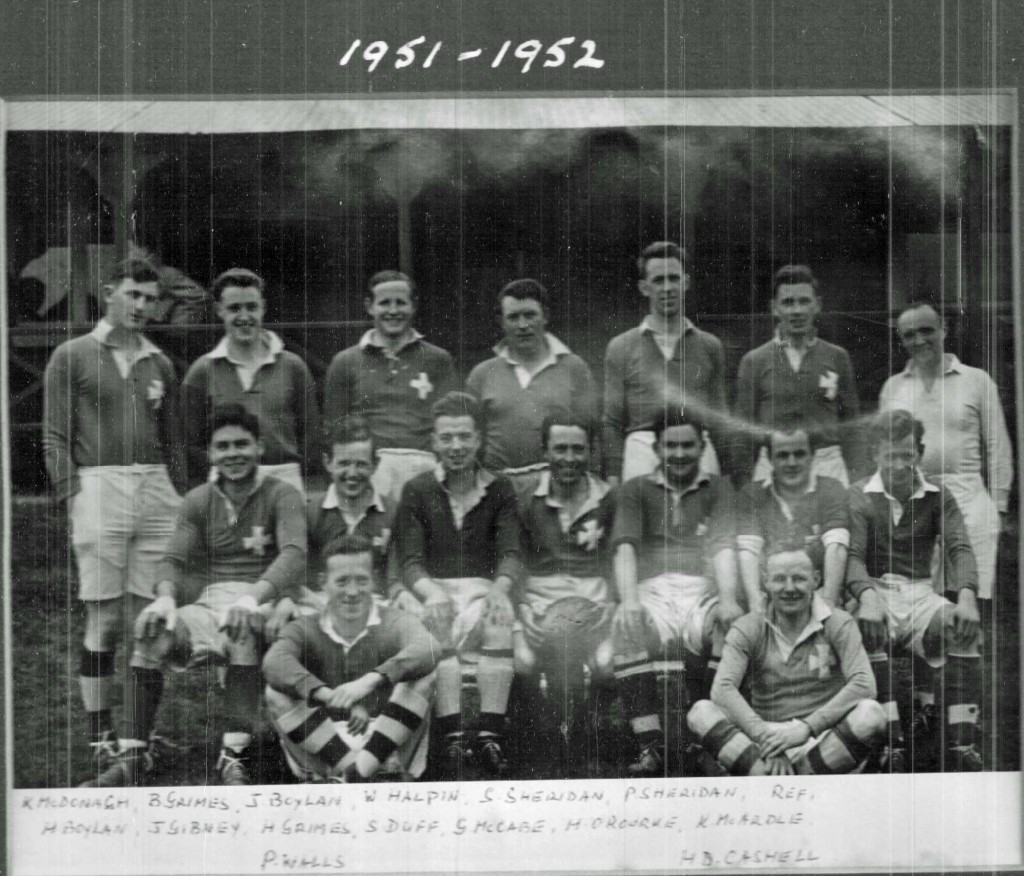 The captain for the season was Steve Duff. Tony Robertson had finally retired and his place at out-half was taken by Phil Walls, with Hilary O’Rourke and Paddy Sheridan (or Stanley !!!) in the centre, and his brother Sean (also Stanley) in the second row. Skerries again reached the final of the Towns Cup against Naas at Donnybrook. For most of the game Skerries led 3-0 until the final minutes when Naas scored a converted try to lead by 5-3 in favour of Naas. With seconds to go, Skerries kicked off and in the ensuing melee, Kevin McDonough went over for a try. Victory to Skerries and three-in-a-row.

The 1961/’62 season saw the inauguration of the McGowan Cup presented by Mr Gerrard McGowan of Balbriggan. In the very first game of this new competition Skerries beat Delvin 9-3 but lost the final to Navan by 11-0.

However, that result was reversed when Skerries defeated Navan 14-3 in the first round of the Towns Cup, only to lose 12-0 to Dundalk in the next round.

The Towns cup in 1962 was won by our near neighbours Delvin who had developed an exciting style of back play.

Skerries reached the final of the Towns Cup in 1963 against Enniscorthy who could only play on a Sunday. Skerries could only play on a Saturday for obvious reasons (Derek Jones, Henry Sheridan, John Clinton, Joe Coleman, John Casey were all prominent Gaelic players). A compromise was reached and the game was played at Athy on Thursday 25th April. The result was a draw and Enniscorthy won the replay of the final on the following Thursday evening 6-3 with a penalty for off-side in the last minute of the game.

Mr Ken Mills, well known Senior Council was the referee of both games 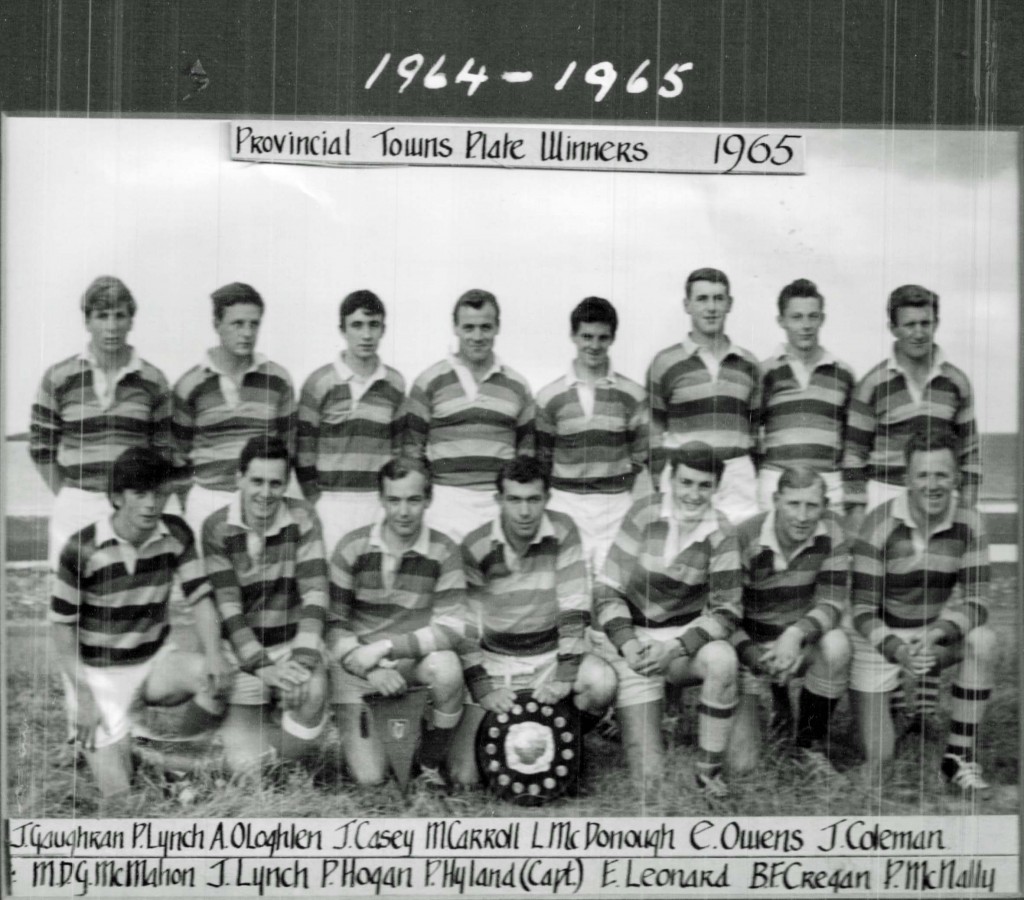 . The Club had an early exit from Towns Cup away to Dundalk 6-5 and then under the Captaincy of Peadar Hyland put a much younger team in the field and went on to beat Wexford Wanderers in the final of the Towns Plate

Peadar Hyland was Captain for a second year in which fortunes were mixed. In Towns Cup we drew with Roscrea and lost our Captain with a bad leg injury. In the replay Skerries beat Roscrea 16-0 only to go down to Enniscorthy 6-3 in the quarter final.

For this season the Club was captained by Paddy McNally. A veteran at that stage, he captained a side composed of players much younger than himself and succeeded in getting them to play with spirit and determination. Skerries were unlucky to be beaten 6-3 away to Co. Carlow in the Towns Cup and in the Plate after defeating Mullingar away only to lose to North Kildare in the next round.

This season under Captain Tim  Hegarty  we had a very young team. We lost to Navan both in the McGowan Cup and Towns Cup. However, in the Towns Plate Skerries beat Curragh, Wicklow, Portlaoise, Dundalk and were beaten in the final by Naas 9-8 in mysterious circumstances.

Under the captaincy of Paddy O’Shea we lost 20-3 to Dundalk in Towns Cup and went on to defeat Delvin, Wexford, Edenderry and Portlaoise in the final to capture the Towns Plate which had so cruelly eluded Skerries in the previous season. On Easter Sunday 1970 Skerries won the North Kildare seven-a-side and our sevens became the first Provincial or Junior side to win that trophy ever in its 17 years.

This season saw the introduction of a new Cup, The Jenkinson Cup for North East second XV presented by Mr Christy Jenkinson. Not alone did Skerries win the Jenkinson cup but also the McGowan Cup which was played on League basis and went on to win the Provincial Towns Cup and Provincial Towns Seconds Cup.

Under the captaincy of Dara McMahon we beat Edenderry in the first round of the Towns Cup followed by success over Dundalk in extra time, Tullamore and North Kildare in semi-final 5-0. The final was played at Curragh Camp where Skerries defeated Navan 14-6 amid brass bands parading goats and a huge following to bring the Towns Cup back to Skerries for the first time in 19 years. Metropolitan Cup winners, St Mary’s seconds defeated Skerries 8-6 in game for Presidents Plaque. Our second XV captured the seconds Towns Cup by beating Mullingar, Drogheda, Dundalk before beating Co Carlow 10-9 in the final. 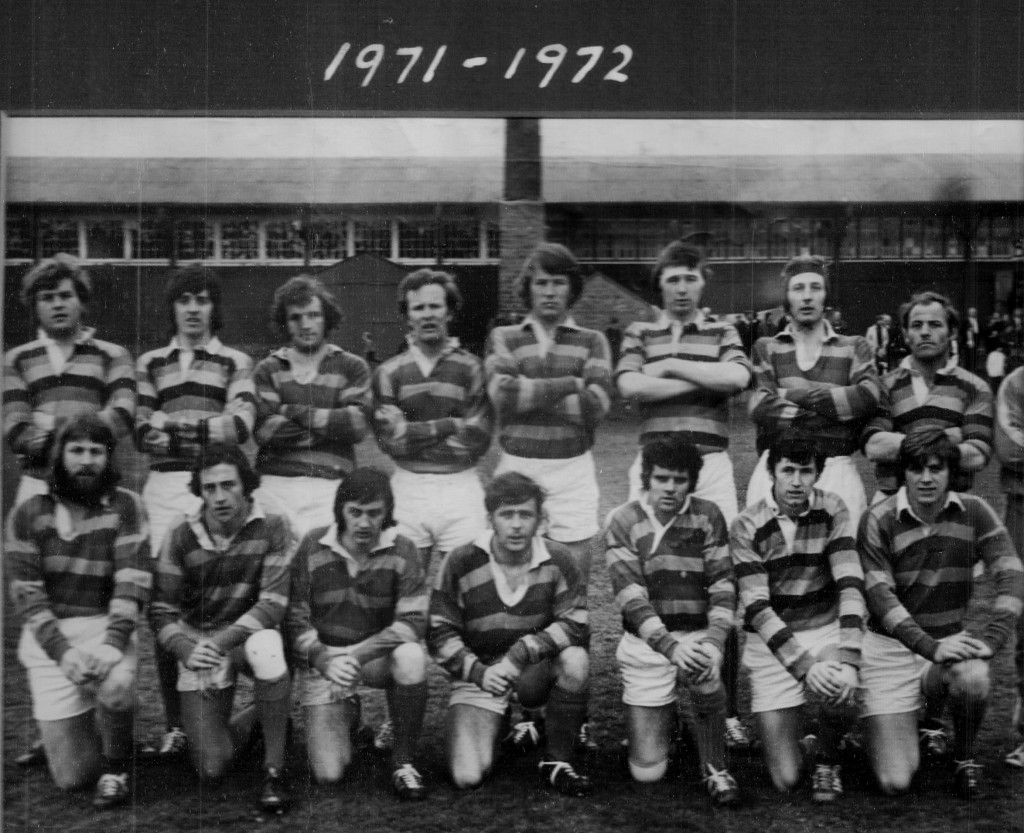 In Towns Cup, Skerries beat Navan, Roscrea and Portlaoise and beat Kilkenny in the final staged again at the Curragh.

In Towns Cup victories over Enniscorthy, Portlaoise and Athy brought Skerries to a final against North Kildare, which Skerries won 12-11, and this made it three Towns Cups in a row.

In the Towns Cup, Skerries beat Naas, Tullamore and Co Carlow and beat Arklow in the final.

The following week it was back to basics with a meeting with The Curragh in the semi-final of Towns Cup. Skerries were well beaten and so ended a marvellous record setting run in the Leinster Provincial Towns Cup. 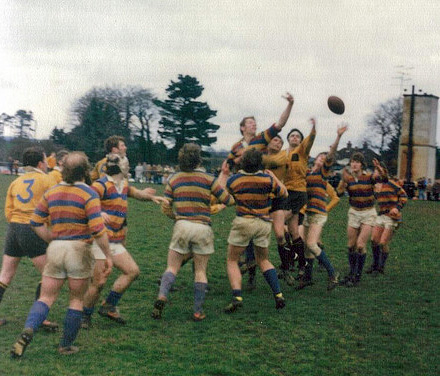 In the Towns Cup our second team reached the final and defeated Co Carlow at Arklow 12-7 to win the Provincial Towns Cup for 11th time.

Others with 5 medals: Des Cashell, Oliver Duff and Paddy O’Shea.